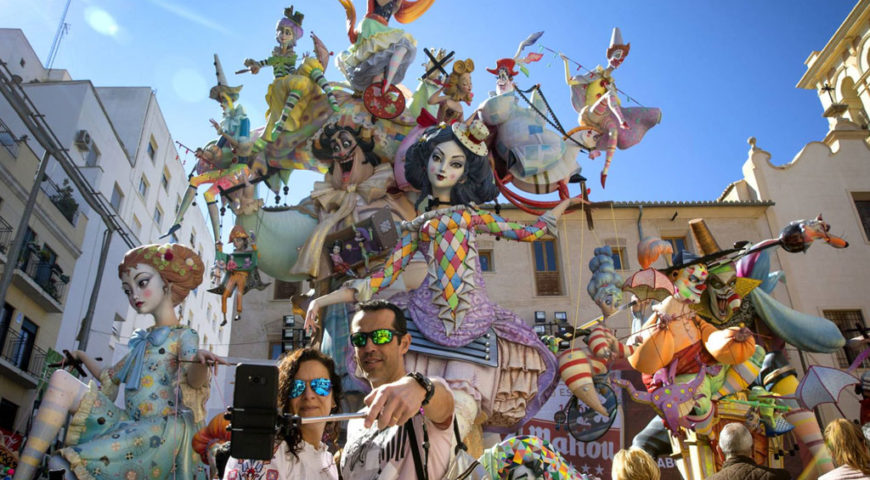 Discover the Fallas of Valencia

The most important celebration of the Community does not leave anyone indifferent and has already been recognized internationally, they also say that everyone should discover the Fallas de Valencia sometime in life and will surely leave you wanting more.

Why are fallera parties so special?

Customs and traditions for your plans in Valencia is the proposal of these ancient celebrations of the carpenters, who burned their pieces of wood.

With the passage of time other elements were added to the purifying fire, humanizing with humor the monuments that acquired an ironic sense in each of the ninots. They have evolved so much that each of the statues are already artistic works and in some cases they have millionaire amounts.

Sign up for 19 days of parties and events discovering the fallera passion that falls in love with its traditional music, paellas in the streets and tons of gunpowder. Tourists and Valencians look forward to the fallera week from March 15 to 19.

Live experiences in Valencia that you will never forget! Especially with the mascletás that are held in the Town Hall Square every day from 2 pm.

During the night the fire castles are another interesting proposal in the Jardines del Turia , also the flower offerings in the well-known Plaza de la Virgen .

Find the program of events to enjoy the Fallas de Valencia as a family, both for children that take place at 10 pm, and for Las Grandes at 00 hours.

We know that both fire and gunpowder arouse passions in the acts of the mascletá, mainly attracted by its presentation and the type of firecrackers that are massively exploited when the “Senyor pirotecnic pot start the mascletà” is pronounced by the Fallera Mayor to present this event.

We talk about an explosion of noise that reaches 120 decibels and it is advisable to take care of the ears during these celebrations. On the other hand, La Plantà that you can discover from March 15 to 16 every year are very special, because they reward the best ninots by pardoning one of them who saves himself from the fire in Cremà.

With the awards ceremony, the major falleras, accompanied by their commissions, go to the Town Hall Square, an event to meet in your escapades in Valencia when they receive the awards.

In recent years, 750 monuments have been created, separated according to their categories and the impressive Castles and Nit del Foc experiences that are enjoyed as a family on Fallas nights with an impressive display of family in Valencia become the best experiences in Valencia fireworks.

Nothing is left to chance, nor the Flower Offering of the faller commissions that parade from the different neighborhoods to the square of the Virgen de los Desamparados, known as patron of the Community. All the branches form a large tapestry decorating the mantle that the Virgin wears with the offerings that are made for 2 days.

Finally, La Cremà is another of the plans in Valencia and although many people feel sorry for this event that reduces giant monuments to ashes, they become a very unique spectacle that is recommended to all visitors.

P repair your best getaways in Valencia during the days that the Fallas are celebrated and end your visit with an incredible proposal that will last in your memory, when burned ninots burn early in the morning. Thousands of tourists arrive these dates every year to live a dream faller week. We wait for you to share the best Valencian traditions.