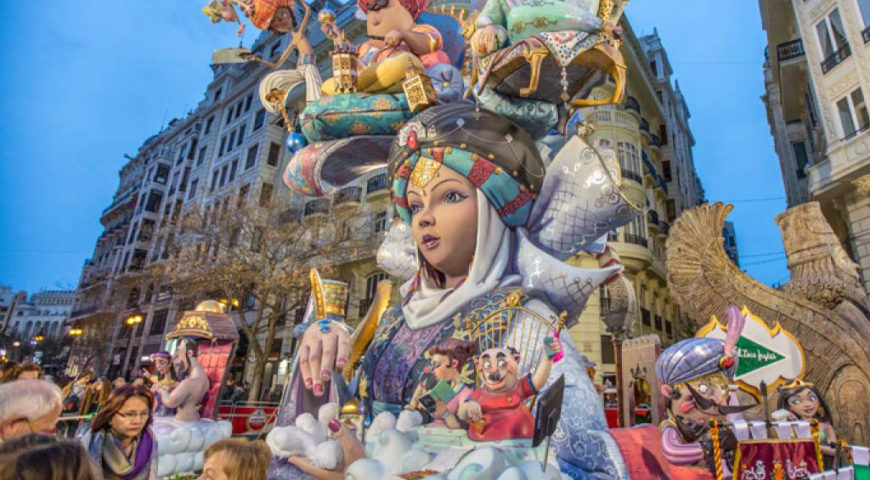 Discover the history of the Fallas de Valencia

March is the month chosen to live a unique event that is already an example of modernity and that makes the city of the Mediterranean port the main capital of gunpowder, party and music with the Fallas de Valencia.

History of the most important Valencian party

It all starts with the feast of San José, which is the patron of the city and on the eve of it is the origin of these traditional festivals that began as an event of the carpenters, who burned the old junk in front of their squares, workshops and streets of wood that served to illuminate their tasks in the winter.

The day of the cremà arises for this reason and is currently when the monuments created for this day begin to burn that coincides with the feast of the saint.

You fail as one of the most recommended plans in Valencia! During the 18th century they waited at nightfall to burn combustible materials on the eve of San José.

Today they are loaded with a more ironic sense and represent in their monuments the most relevant social facts to make a social criticism with humor as the main fallero element.

Discover the history of this holiday in your escapades in Valencia that are recognized worldwide and each year receive a greater number of visitors. This is because they are the most spectacular and baroque festivals of fire, although in 1870 it was a celebration pursued as Carnival.

However, during 1885 the existing pressure gave life to a movement of regional traditions and began to give life to the Fallero monuments, emerging a healthy competition between the neighbors with the predominance of aesthetics.

Failures cast especially castles for fireworks, in addition to the Ninot Exhibition, the Offering of flowers to the Virgin and the Nit del Foc, also the plant or the Cavalcade of the Kingdom that are already the main experiences in Valencia.

The first awards given by the City Council were in 1901 joining the political power with the people in this popular festival.

Valencia city of Fallas and splendor

More than a million tourists come together in this event, choosing this city among their getaways in Valencia, discovering the mascletás and the exhibitions of Institut Valencià d’Art Modern , without neglecting the essential visit to the City of Arts and Sciences, among other sites special.

Contemplating the Fallas de Valencia and enjoying the carabassa bunyols with chocolate is a tradition that you have to live, starting your visit on March 15 when the plant begins and from 16 the monuments that already reach 700 reach 25 meters of tall.

Organize your plans in Valencia from March 12 to 19 to live your best week with the whole family , when the major falleras kick off these memorable celebrations.

Experiences in Valencia that you will never forget with the sound of music and the smell of gunpowder that transforms the Valencian streets.

You already have an unavoidable appointment in the Town Hall square on March 1 to discover in good company the mascletà, a spectacle for your senses. Are you going to miss it?

Feel the vibration that your body will travel with an indescribable feeling of feelings that you will not forget. Plan your visit to the city and be part of the history of these holidays with a tradition that is already recognized throughout the world. Live the joy of this event and get ready to record everything that happens in the Fallas!