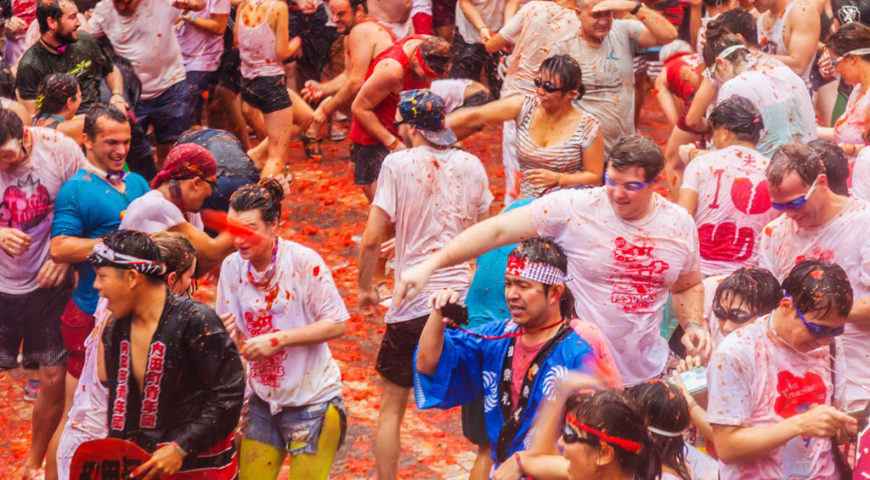 Discover the tomatina of Buñol

There is no doubt that the Spaniards know how to have fun devising the best parties, as proof of this Buñol’s tomatina is one of the countless popular traditions of maximum fun.

Festivals with charm and tradition in Buñol

We tell you everything you need to know to participate in this event known in all parts of the world, discovering a little history to enjoy one of the best experiences in Valencia.

In 1945 this celebration emerged, while young people waited for the parade of bigheads and giants in the town during the popular festivities of August.

Everything is due to the boredom of the kids who got into the procession, causing the fall of one of the big heads, due to the anger of the man began to push and hit, starting a great brawl.

Things that happen when fate conspires to create a different day and it was just at a vegetable stand where the peat took part of the products of the stand and began to launch among them.

During this episode the tomato was the winner among the products that were launched, until the police arrived and everything ended. However, young people provoked the same fight the following year by organizing a similar one, although they already brought tomatoes from their homes.

Getaways in Valencia that deserve to be discovered, knowing in advance the history of events.

In 1950 this battle was banned before the people’s complaint and was carried out years later. This event was progressing more and more with dozens of tomatoes that flew back and forth through the streets, gradually becoming an annual tradition.

During 1957 Buñol’s tomatina was banned again, but the burial of the tomato was organized by walking a giant in a coffin, while listening to the funeral march played by the music band. Given this, the party returned because the authorities defeated and gave way to this event.

In 1987 it was declared by the General Secretariat of Tourism, as a Festival of International Tourist Interest after the report issued by RTVE that increased its popularity.

It is currently one of the main plans in Valencia that is celebrated on the last Wednesday of August every year and this battle begins at 11 hours with the first housing and the second one an hour later ending this remembered moment.

If you are wondering what is the way to access the tomatina, you should keep in mind that Buñol is just 45 minutes from the city of Valencia if you prefer to go by train.

This town receives around 50,000 visitors every year and is a town of only 9,000 inhabitants, it is obviously one of the most recommended getaways in Valencia.

Remember to show your ticket at the entrance booths to attend the most anticipated celebration and you will receive a receipt accompanied by a bracelet, so you can go to the celebration areas.

Enjoy the original battle with tomato throws and don’t forget this event in your plans in Valencia.

Write down some tips before starting: look for another party if you do not feel comfortable with wet or sticky clothes, but if you like to be part of a fun event, the tomatoes will be unforgettable among your many experiences in Valencia.

Buy the tomatina shirt or wear clothes that you will never wear and put on your old shoes! Do not forget to be careful with the t-shirts that are part of the event and always squash the tomatoes before starting the fun with your friends or family.