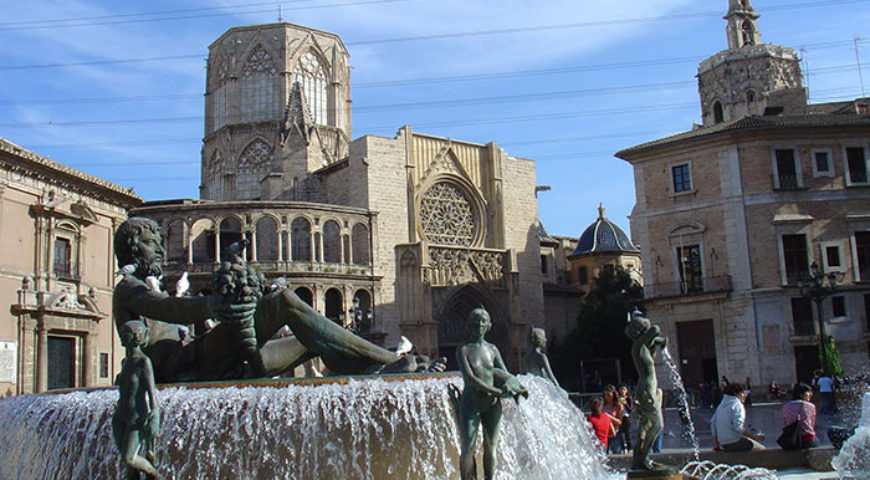 Enter the history of Valencia!

A bit of history about Valencia

We propose a cultural trip through the history of Valencia, for all those tourists who are interested in knowing, enjoying and living the true essence of this municipality, where in addition to entering years ago, you will have the opportunity to contemplate the streets, houses, palaces that hides the center of this great city.

We begin our tour in the Plaza del Ayuntamiento, one of the most central and important squares of the city. Its origins go back to the ancient Convent of San Francisco, a Franciscan monastery that already in the days of King Jaume I the Conqueridor occupied the space that would later become a cavalry barracks. In 1891 it was decided to demolish it, leaving as a consequence a huge open space where the municipal authorities planned to build the square. The Town Hall of València is located on the former Teaching House and its façade was remodeled between 1904 and 1942.

Just in front of the town hall you will find the post office building, built between 1915 and 1922. Located partly on the old Fishermen’s Quarter, inside it houses a large iron and glass skylight of different colors which is worth contemplating.

Through San Martin Street you reach the Plaza de la Reina, dedicated to Queen Maria de las Mercedes de Orleans, first wife of King Alfonso XII, and which is currently kilometer 0 of València and one of the busiest squares and crowded of the city. It is here where you will have the opportunity to know the most historic shops of the municipality. In this square you can access the Miguelete, an icon of the city, Gothic bell tower of the Cathedral, which has 51 meters high. After climbing 207 steps you will contemplate the best panoramic views of Valencia.

From here you can access the Plaza de la Virgen, where the old Roman forum of the city of València is located. You can see the Basilica of Our Lady of the Desamparados, the Gothic palace of the Generalitat and the beautiful Cathedral of Valencia built between the thirteenth and fifteenth centuries, causing a mixture of artistic styles that makes this cathedral a universal jewel.

In the center of this beautiful square there is a beautiful fountain inaugurated in 1976, which represents the figure of Neptune and is dedicated to the Turia river, representing the 8 main ditches of Valencia. Every Thursday at 12:00 there is the possibility of witnessing a unique testimony: “the Tribunal de las Aguas”, which for a thousand years has met with the intention of orally regulating the use of irrigation. This court is the oldest existing legal institution in Europe, and probably also the oldest in the world. In 2008 it was declared Intangible Heritage of Humanity by UNESCO.

As a complement to all this heritage, you can enter Caballeros Street, from where you will reach the Barrio del Carmen, a historical place that contains thousands of stories among its walls. For years it has been orchard, Muslim refuge, home of the medieval aristocracy, place of convents or proletarian zone, because this district was enclosed by a Muslim wall and another Christian one. You can check it out if you visit the Torres de Serrano and Torres de Quart, authentic remnants of medieval times.
The Barrio del Carmen owes its name to the church and the convent of Carmen. Once you cross the walls, you will notice the mixture of history and art that simultaneously and over the years has taken over their streets.

But here does not end your visit, because this area is home to some of the most emblematic museums of the city, such as the IVAM, the MUVIM or the Center del Carme. Forming an urban art space, with streets full of culture where impressive graffiti are mixed like those of the famous street of colors.
Undoubtedly, a neighborhood full of life that has managed to maintain its tradition through buildings or palaces in which, still, you can see the remnants of a past history.